Perspectives for the Urban Periphery: A Case Study from Bucharest

The second year IMLA students attended an EU-funded Intensive Programme in Bucharest from end of March to beginning of April. The objective of this workshop was to find perspectives for the urban periphery that are combining the needs of economy, ecology and society. Furthermore, the spatial qualities of dispersed and ill-defined were to be enhanced. 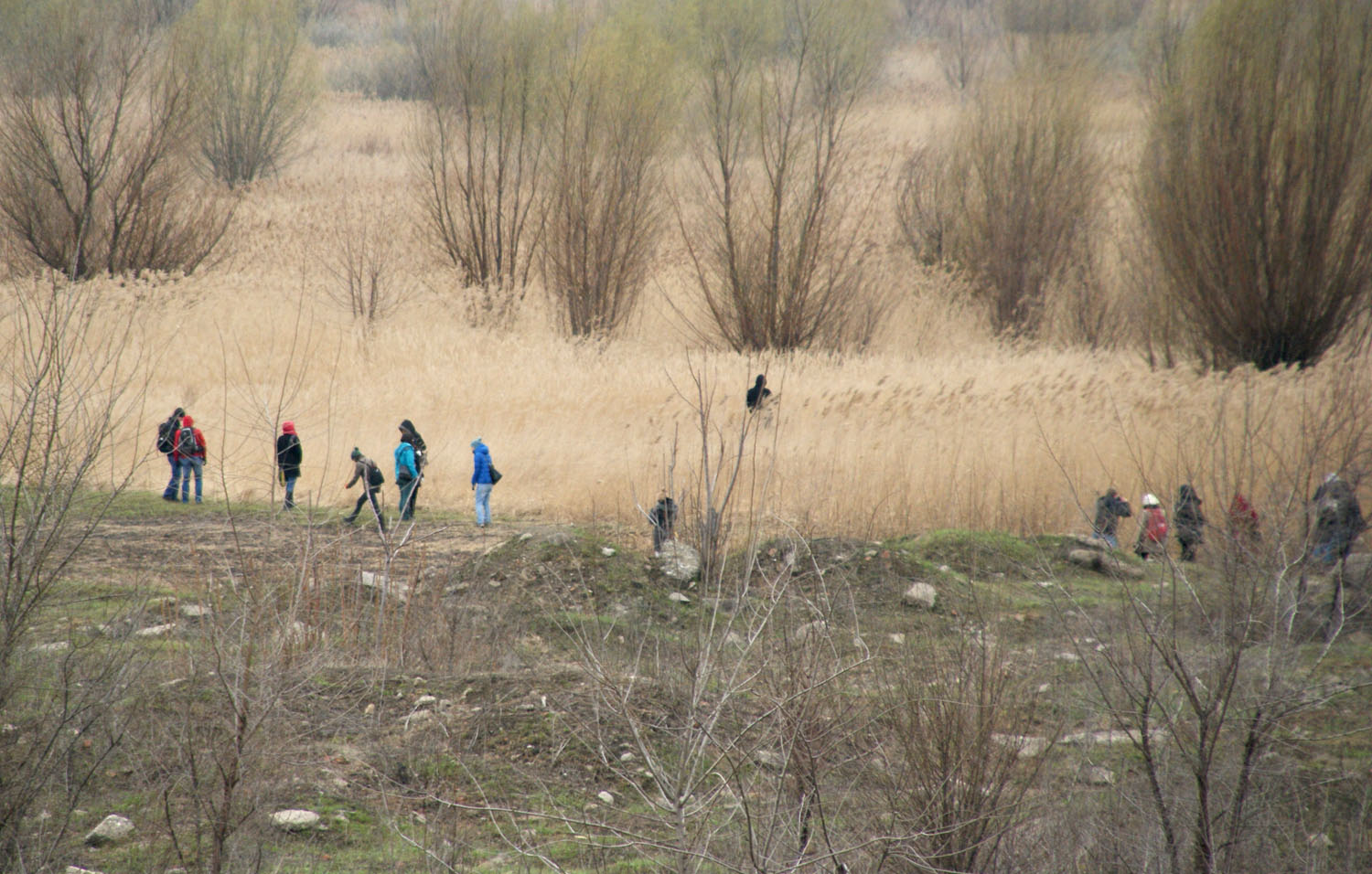 nature experience in the project area

the scenario method was used in the first week 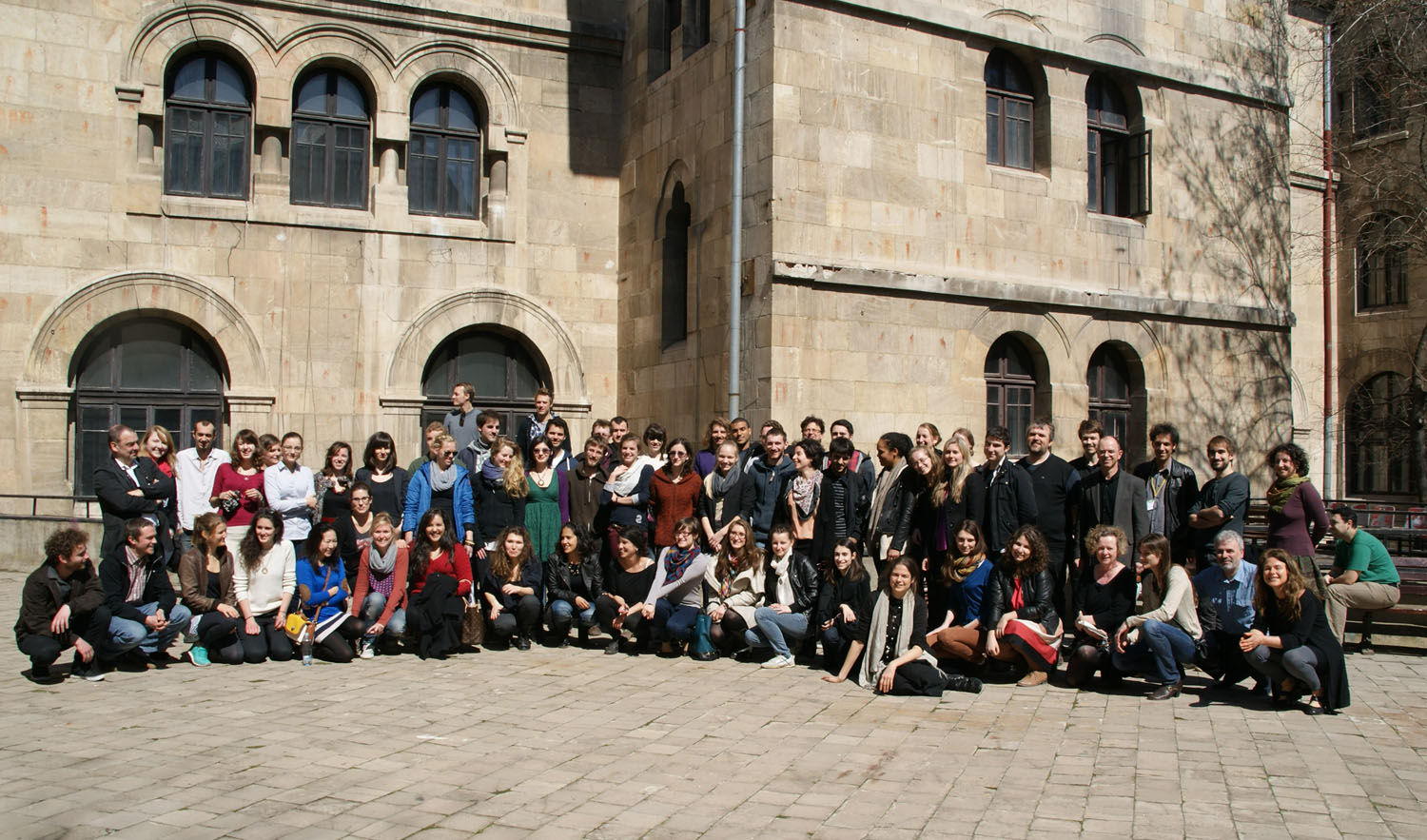 all participants at Ion Mincu University 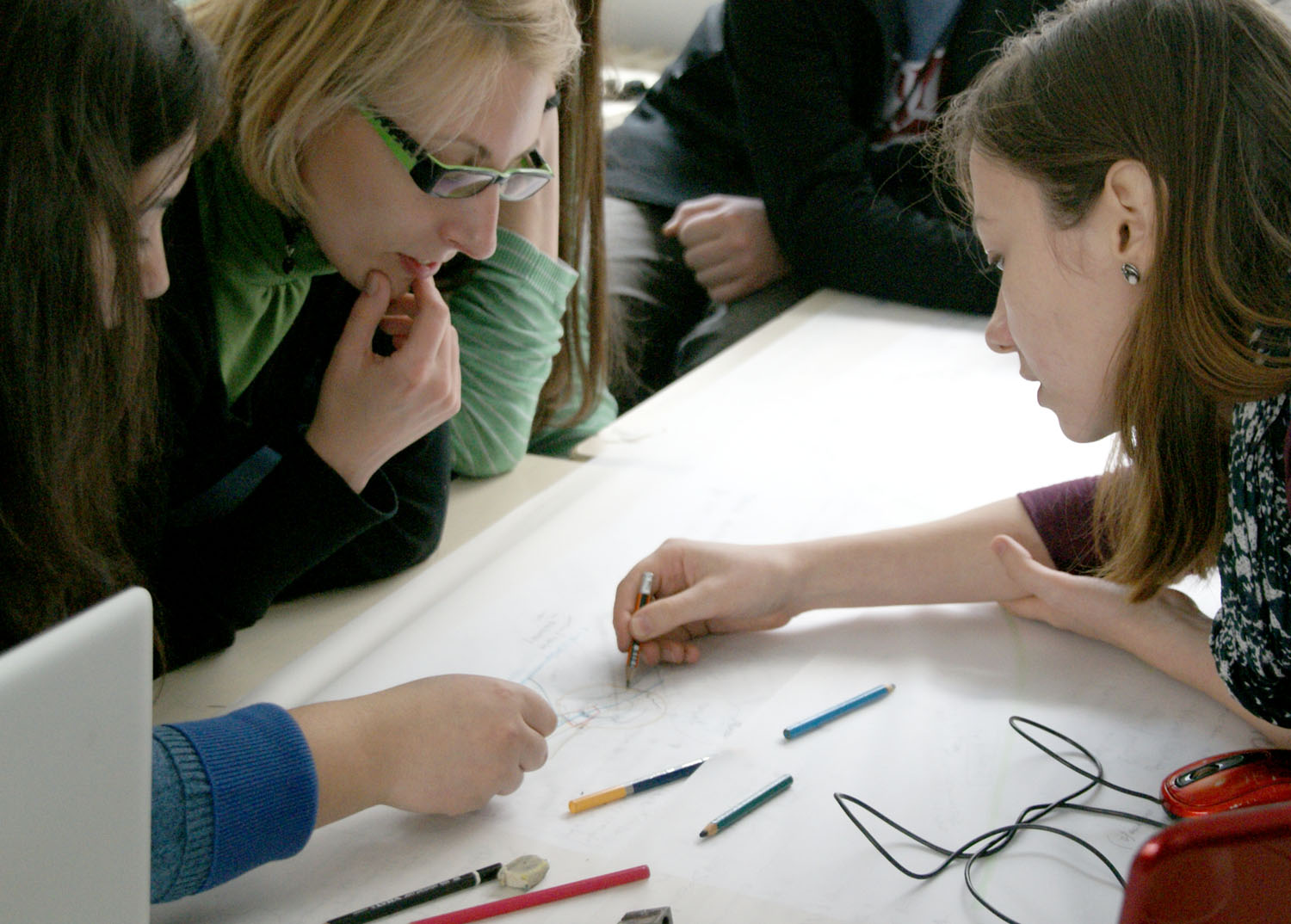 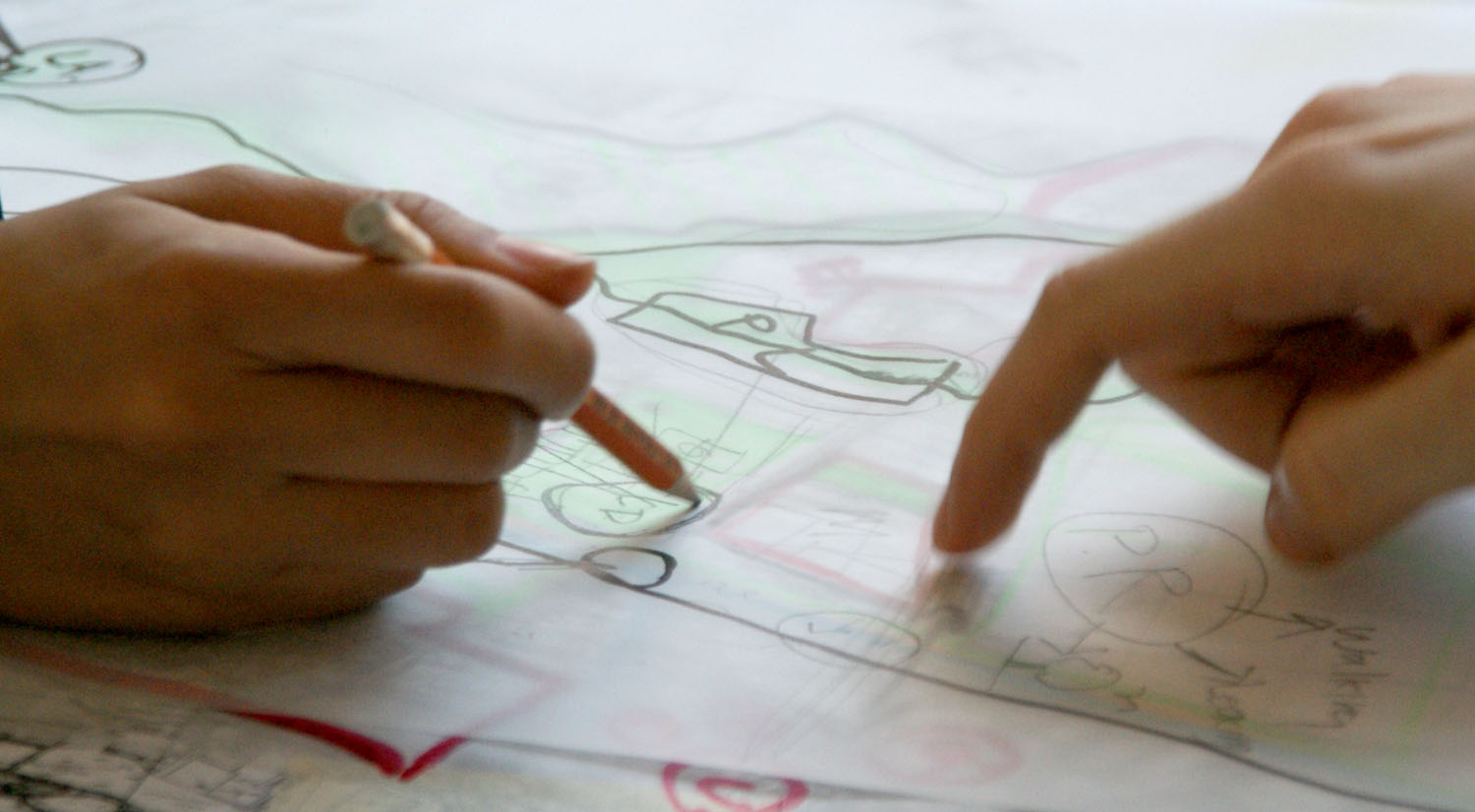 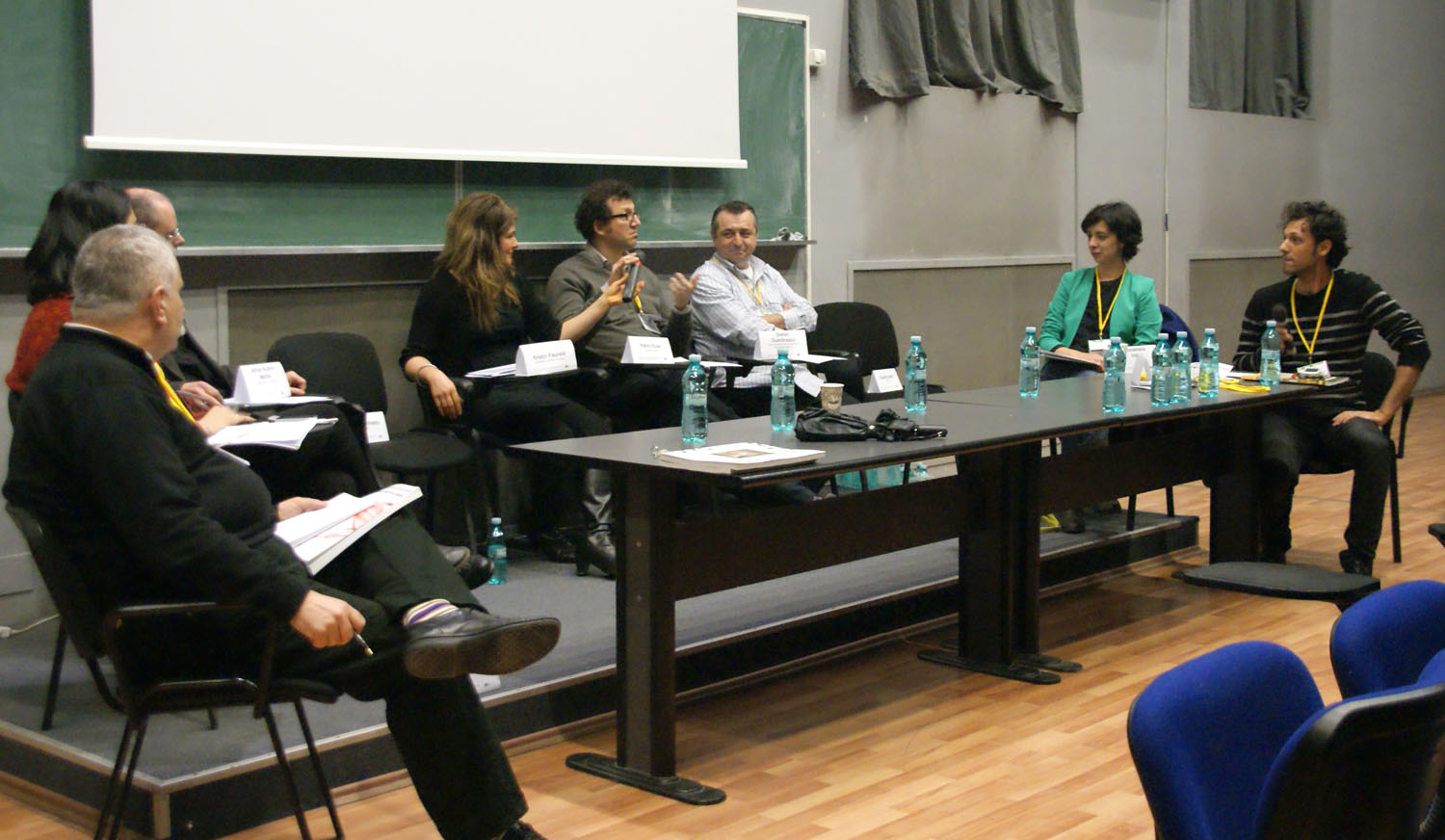 panel discussion on public participation and governance
Previous Next

The vast majority of European citizens lives in urban areas. More precisely: this majority lives in the urban peripheries and not in the city centres. However, the public awareness of peripheries is weak compared to the centres where the icons of a city are usually found.

Drawing on this theme, Ion Mincu University for Architecture and Urbanism hosted an intensive design studio from March 23 to April 7. Teachers and students from universities in Belgium, Estonia and Germany (IMLA) stayed at the Bucharest Faculty during this period. The participants had different academic backgrounds ranging from landscape planning to urban design and architecture. This programme aimed to explore the urban periphery from various perspectives and to draw up sustainable future scenarios. The design studio was funded by the European Union under the Lifelong Learning Programme (Erasmus Intensive Programmes).

Urban and peri-urban areas are Europe's key to economic growth, social wealth and political stability. However, this urban productivity is highly threatened if its ecological foundation is destroyed. The objective of this workshop was to find perspectives for the urban periphery that are combining the needs of economy, ecology and society. Furthermore, the spatial qualities of dispersed and ill-defined were to be enhanced.

Bucharest has seen a very compact urban development until 1989. The dramatic shift from state-controlled planning to a free marked economy let to dynamic developments in housing and commerce in the urban fringe. This dynamic has slowed down significantly with the financial collapse of 2008. Therefore, the design studio on urban peripheries was held in the right moment: the difficulties caused by the previous developments have been recognized and there is time to think about alternative visions. The south-eastern fringe of the city was chosen as a case study area for this studio starting from the so-called Văcărești lake eastwards along the canalised river Dâmbovița up to the periphery ring road and the adjacent former villages. Being complex and large the area posed a big challenge. But it was also full of potentials with regard to the ecological and recreational functions of the urban periphery. However, competing interests of housing, agriculture, industry, traffic, nature protection, water management, recreation and various other sectors had to be balanced.

60 students and 18 teachers attended the course from four different study programmes. The students worked in international and interdisciplinary teams joining the competences of architects, urban planners and landscape architects. Their work started with a site visit followed by a short and intense analysis. The teams worked in parallel on ten different themes (such as water, landmarks, settlements) and brought the findings together again in a joint presentation. The second step was to draw up a scenario for describing a possible set of future visions. For this, the students were forced to move their viewpoint from the site up to the macro-level. Which major trends in economy, society, environment, policy and technology can be assumed and how will these influence the development of the area? The scenarios were presented at the end of the first week. The visions ranged from positive foresights such as Green Revolution and High Technology to negative perspectives considering for example a severe economic downturn, disintegration of the European Union or an environmental catastrophe such as an earthquake. However, mostly the positive scenarios were selected for the further development. In addition, several thematic lectures took place in the first week as well as two panel discussions with international and local experts and stakeholders. The first roundtable reviewed the concept of landscape in Romania while the second looked at the role of scenarios in the Romanian planning system. A wider public and professional local audience attended lectures and panels of both weeks.

The students task for the second week was even more demanding. The lines of thoughts were expected to go in parallel on four levels: space, participation, finance and governance. Again, different lectures on governance, land management and landscape design complemented the theoretical input. In addition, two further roundtable discussions were held on the themes of participation and the European dimension. After another week of highly intensive work, intercultural communication and interdisciplinary alignment the student groups presented colourful future pictures for an area full of hidden potentials.

The aspect of urban agriculture played an important role in many of the concepts presented. The general interest of planning in urban agriculture has increased significantly in the last years. Agricultural areas in the urban fringe can play a strategic role at the interface of economy, ecology and recreation. Raising this issue in the context of Bucharest together with the aspects of participation and governance has surely created important research questions that hopefully will be taken up further.

Everyone involved perceived this intensive design studio as an important professional and cultural experience. Plans have already been made for continuing the model in 2014 on a different site. All lectures and project outputs will be made available to the interested public through the project website.