In the context of their first main project IMLA students were asked to conceive periurban landscape scenarios. 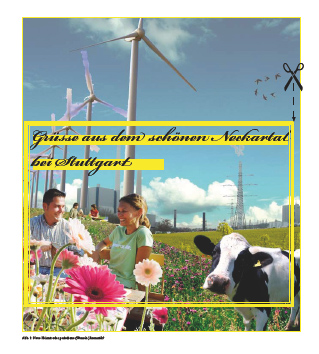 Three different areas, all part of Stuttgart Region, have been considered in parallel working groups. The sites have been selected according to their different levels of urbanisation. Based on an initial system analysis, in which the mayor driving forces were identified, students outlined a variation of possible development perspectives.

Stuttgart Region is home to around 2.7 million inhabitants and comprises 179 local authorities (i.e. communities and rural districts). As one of the most prospering areas both in the German and the European context it is also the most densely populated German territory with around 700 people per square kilometre. Interestingly, the region is famous for both its economy and its landscapes. This hints already at the very specific spatial composition this project aimed to address.

Scenarios for the Filder Area

This fertile plain with intensive agricultural production south west of Stuttgart city is the region's major battlefield for land use conflicts. Stuttgart airport is the primary land consumer in this context. The next big impact is expected to emerge from the implementation of Stuttgart 21 which is the "flagship" infrastructure development project of the region.

Multifunctionalism in landscape development was the cross-cutting theme of all proposals, whereas some were more theoretical in nature, others more design-oriented. However, all approaches were underlined by a serious GIS-based analysis of the actual landscape texture and functionality. Ideas reached from landscape hybrids via energy and nature parks to more theoretical appraisals of periurban aesthetics and new values emerging from a mix of recreation and agriculture. Some projects even aimed at reconsidering common on planning practice and  methodology.

The small town at 30 kilometres south of Stuttgart has devoted itself to the installation of factory outlet stores, which has made it very famous among the Swabian people and beyond. Land consumption related to the construction of outlet stores, car parks and roads is thus happening at a speed inadequate for a community of 22.000 inhabitants. However, the surroundings of Metzingen are of high scenic and recreational value.
This aspect was taken on in the respective student approaches by identifying and evaluating landscape elements of the periphery of Metzingen in the first place. This was also done via GIS-based analysis. On that basis a set of measures was formulated, aiming a interweaving and thus strengthening external and internal green structures. Complementary to this urban perspective another approach looked at the connection between the city of Metzingen and the new biosphere reserve on the Swabian Alb.

Transforming a Military Area on the Swabian Alb

The former military training area of Münsingen has only recently been transformed into a UNESCO MAB biosphere reserve. In the past the area was inaccessible for the public. Therefore, a unique landscape character has been preserved which is absolutely unusual for a region with such high density of land use. Today the area is going through a process of redefinition concerning its role for the region as well as for the adjacent communities. In the context of this project a feasibility study for a wild park on the territory of the military training area was implemented.

The different levels of urbanisation cover a wide range of what we can find in metropolitan regions and their surroundings. Such transect from urban to rural provides an ideal field for projects within landscape architectural education. The students took at least two advantages out of this approach: they had a common, periurban topic, as well as the possibility, to choose their own specialisation interests. In addition, the work they delivered varied from theoretical in-depth studies to practical and detailed local solutions, mainly based on scenarios. They experienced, that there is a strong need for integrative studies, derived from a kind of systems analysis, in order to find out, how landscape architecture can influence spatial development options in the context of market forces and state regulations.